Hurricane advisory: Rentals in and around Louisiana will be effected by Ida
Sign In

What is a CARB-Compliant Generator? 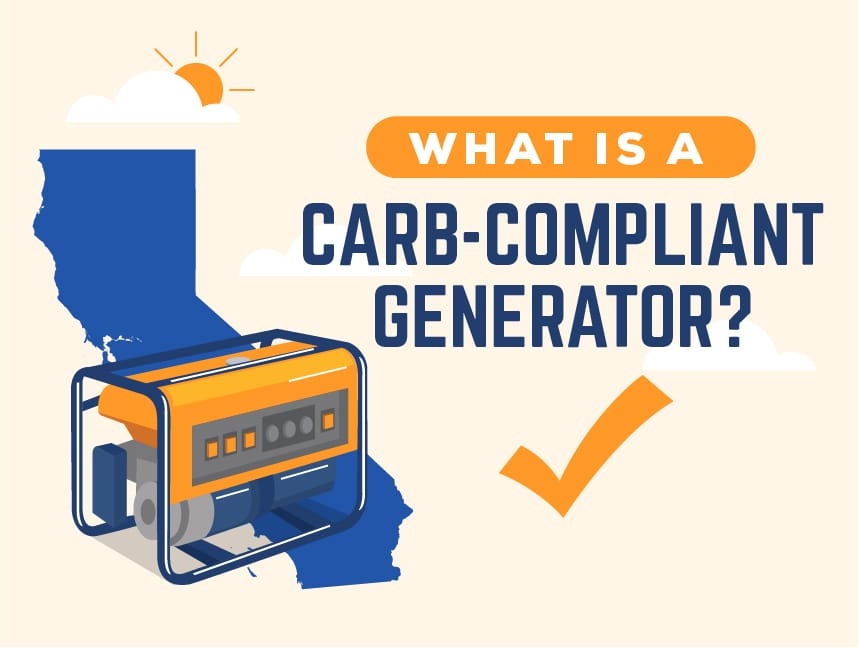 When the electricity is turned off, a portable generator can provide backup power to your home or business. Generators are internal combustion engines much like auto motors. But instead of propelling vehicles, they generate electricity that can run lights, fans, heaters, or other appliances during a power outage.

Like any engines that burn combustible fuel, power generators can produce toxic fumes that are released into the atmosphere. And, in the state of California, that’s where CARB comes in.

What is CARB and What Does It Do?

In this case, CARB has nothing to do with a carburetor (although that’s a good guess where engines are concerned). It has everything to do with a state that has been fighting to preserve and improve its air quality for decades.

What Does CARB Do?

How is CARB Different from the EPA?

The Environmental Protection Agency is the environmental watchdog agency for the federal government. The EPA has its own guidelines for the manufacture, sale, and import of internal combustion engines in the United States.

EPA air quality regulations may or may not overlap with CARB guidelines. CARB rules are usually stricter than EPA rules. This means, if you live in California, it often isn’t enough to comply with EPA regulations. You also have to follow the rules set forth by CARB.

Many generators come labeled as “CARB-compliant.” Look for those even if you don’t live in California. They’re better for the environment and legal for use everywhere in the United States.

What is a CARB-Compliant Generator?

The California Air Resources Board was created to devise and enforce limitations on harmful greenhouse gas emissions. Generators are engines that burn combustible fuels; it’s impossible to keep such emissions from entering the air while operating one. These facts created a “rock and a hard place” situation that CARB was forced to address.

To balance these conflicting forces, CARB drew up criteria for energy-efficient engines that could produce as few pollutants as possible. This led to the manufacture and certification of CARB-compliant generators.

Why Does a Generator Need to be CARB-Compliant?

Generators need to be CARB-compliant so people can use standby power without destroying the environment or their health. Here’s an example:

Wildfires are an ever-present, growing threat in California. Fifteen of the 20 most destructive fires in the state’s history have occurred since 2000. So electric utilities sometimes de-energize their lines to reduce the chance of sparking a fire.

CARB-compliant generators address all of these issues at once, resulting in environmental, health, and financial benefits. Even if you don’t live in California, choosing a CARB-compliant fuel generator can provide advantages in these areas:

How Does CARB Regulate Generators?

CARB regulations for stationary and portable generators were developed in collaboration with the state’s local air districts. These districts are responsible for safeguarding regional air quality.

CARB regulations seek to limit small, off-road engines (often referred to as SORE) from releasing pollutants into the atmosphere. These control pollution from three sources:

Manufacturers of standby generators and other small engines are responsible for having their products certified by CARB and the EPA. This involves several steps:

Purchase and Use of Small, Off-Road Engines (SORE)

For consumers, the responsibility of CARB compliance lies mainly in their purchase of a generator, not the use of it. Small standby generators and other small engines must be CARB-certified to be legally sold in California.

CARB doesn’t place restrictions on the use of certified backup generators if they’re small enough. But often these are still subject to requirements from the local air districts. This can include permitting requirements, emission limits, and operating restrictions.

The smallest portable generators less than 50hp also are generally exempt from air district rules. Owners should check with their air district to determine if there are established usage limitations or permit requirements on their generator.

During emergency outages, generators can be crucial. It’s important to know what kind you can operate, and what rules you need to follow when using them.

To read the regulations for various types of generators in California, visit the generator section on the CARB website. Users also should contact their air district (California has 35 of them) to make sure they’re complying with permitting requirements.

How Can You Tell if a Generator is CARB-Compliant?

To discern whether your generator complies with CARB regulations, you can consult these resources:

If your state requires CARB compliance for gas-powered equipment, confirm that a generator is CARB-certified before you buy it.

If you’ve ever looked at an emissions label on a  generator or other engine and wondered what all the letters and numbers mean, ponder no more. The EPA and California Air Resources Board use standardized codes to identify important features of engines and their emissions.

It took a lot of digging, but we’ve cracked the code for you. Here’s how to read the codes on an engine emissions label.

There are usually two 8-12 character codes on an engine emissions label. The first is the EF, or Engine Family code.

Let’s use this as an example:

EF: = The first pair of letters stands for the words “Engine Family.” Each engine belongs to a “family” whose members all share the same drive-train and emissions characteristics.

HNX = The next three letters represent the manufacturer code, or the name of the company that made the engine. (HNX stands for Honda, BSX for Briggs & Stratton, YMX is Yamaha, etc.)

S = The next single letter represents the industry sector code. (Most portable standby generators fall into the sector of small, non-road, spark-ignition engines under 19 kilowatts, represented in this code by the letter S.)

.389 = The three-digit number preceded by a decimal point tells you the code for engine displacement, which is measured in liters or cubic centimeters (.389 liters is 389 cc).

AB = The final two letters in the code represent the name the manufacturer has designated for this engine family.

The second sequence of letters and numbers is the EVF, or Evaporative Family code, which describes certain characteristics of the engine’s fuel system and fuel evaporation safeguards.

EVF:  = The first three letters before the colon stand for the words “Evaporative Family,” referencing the set of standards for the fuel and evaporative systems that each engine adheres to.

C = The first letter after the colon stands for the venting control type used to vent fumes from the engine’s fuel system. (C stands for carbon canister, S for sealed tank, etc.)

M = The next single letter represents the tank barrier type, or the material used to insulate the fuel tank and keep the fuel inside. (There are many types and corresponding codes that can be used, such as M: metal, P: plastic, C: co-extruded, L: selar, N: nylon, A: acetal, or O: other)

HNX = Just as in the EF code, the next three letters represent the manufacturer code, or the name of the company that made the engine. (HNX stands for Honda, BSX for Briggs & Stratton, YMX is Yamaha, etc.)

2 = The first single numeral represents the engine class, just as in the EF code. (The code 2 stands for a non-handheld equipment engine greater than 225 cc displacement.)

2A = The final numeral and letter are the manufacturer’s unique code or identifier for this particular engine in this evaporative family.

Features of a CARB-Compliant Generator

Different CARB regulations apply to different models and fuel types, but several features are common to most CARB-compliant generators.

Can I Use a Non-CARB-Compliant Generator in California?

The short answer is actually two answers: Yes, you can use one — but no, you can’t buy one.

CARB rules don’t restrict you from using a non-CARB-compliant generator in California if you already own one. However, you are not permitted to sell or buy non-CARB compliant generators of any size or model in the state.

Before you use your generator, check with your air district to make sure you can comply with its permitting and operating requirements.

Using a CARB-compliant generator isn’t just the law in California, it’s a good idea overall. It can keep you safer from substances that pose health risks, and it can help the environment, too. By reducing pollutants in the atmosphere, CARB rules help protect trees that provide the oxygen we breathe. They can even help protect the ice caps, staving off global warming.

With the mounting risk of wildfires (and accompanying outages), reliable emergency power is more important than ever. CARB-compliant generators can supply that power. They also can help you stay on top of maintenance, guard against backfeed, and stay safe from electric shock. They can be a great investment in your health, the environment, and your peace of mind.

How Do Construction Cranes Work?
Tracks or Wheels: Which Are Better on a Skid Steer Loader?
The Ultimate Guide to Building a Generator Enclosure
26 Heavy Construction Equipment Names
Bulldozer Types, Parts and Their Uses
Generator Maintenance Checklist
What Can You Put in a Dumpster?
Common Forklift Rental Prices For Your Next Project
Top 5 Manufacturers of Excavator Attachments: Get The Job D-O-N-E
How do Porta-Potties Work?
Equipment Generator Share this article:

We are currently rebuilding our checkout system and apologize for any inconvenience.

To order all equipment at once, please call (888) 325-5172.
Processing...
×
Enter jobsite location to see local rates:
Use Current Location